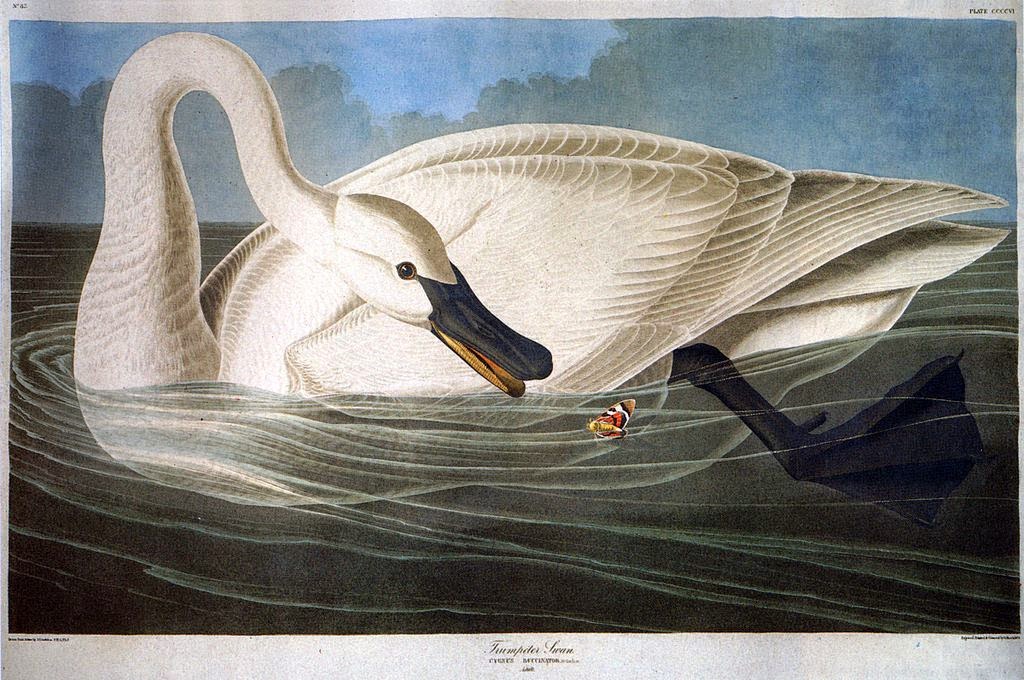 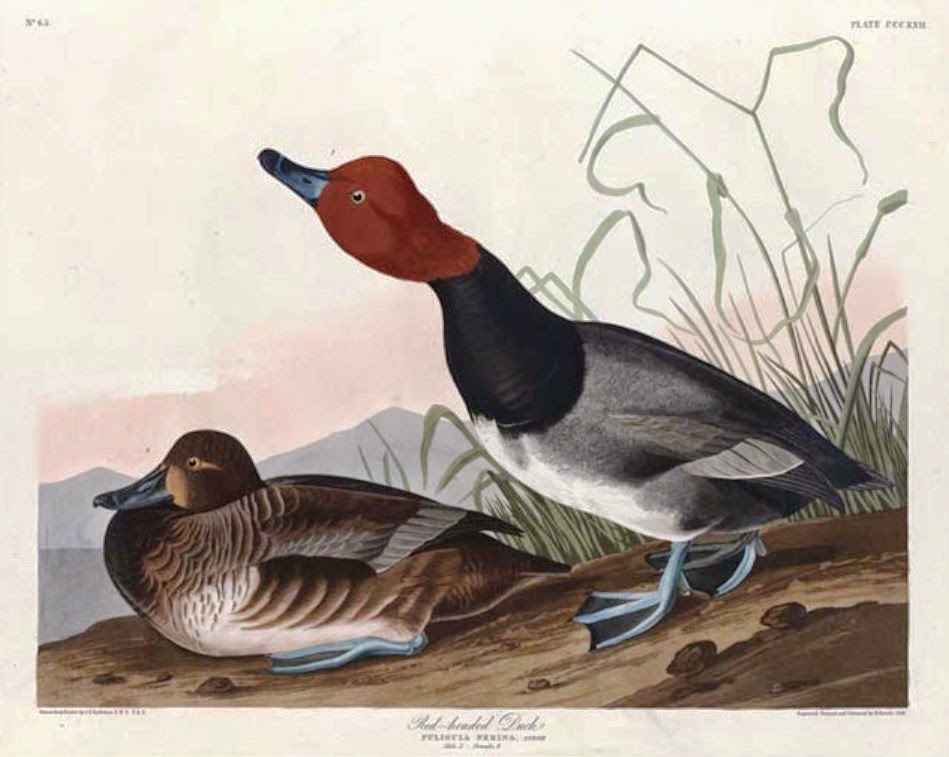 First state of the title in volume I, containing 13 lines (before the addition of two extra lines listing Audubon's memberships to learned societies and without volume number). The plates in this set are arranged in order of publication (not by families) and numbered I-X, 11-14, XV, 16-100, CI-CCCCXXXV. Thus, most of the first 100 plates (Vol. I) are early states with Arabic numbering. All of the first ten plates are engraved by William Home Lizars alone, before retouching by R. Havell,
Jr. 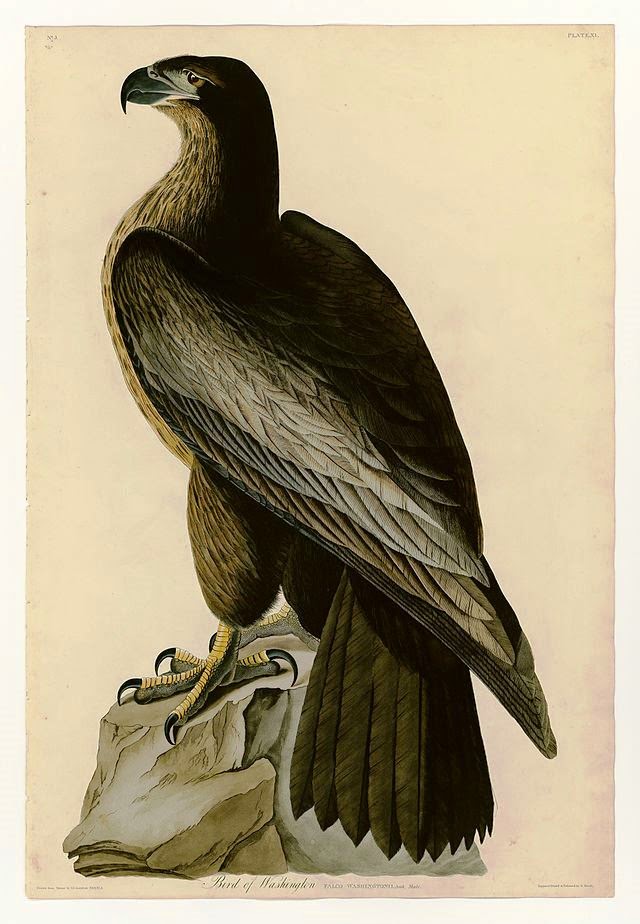 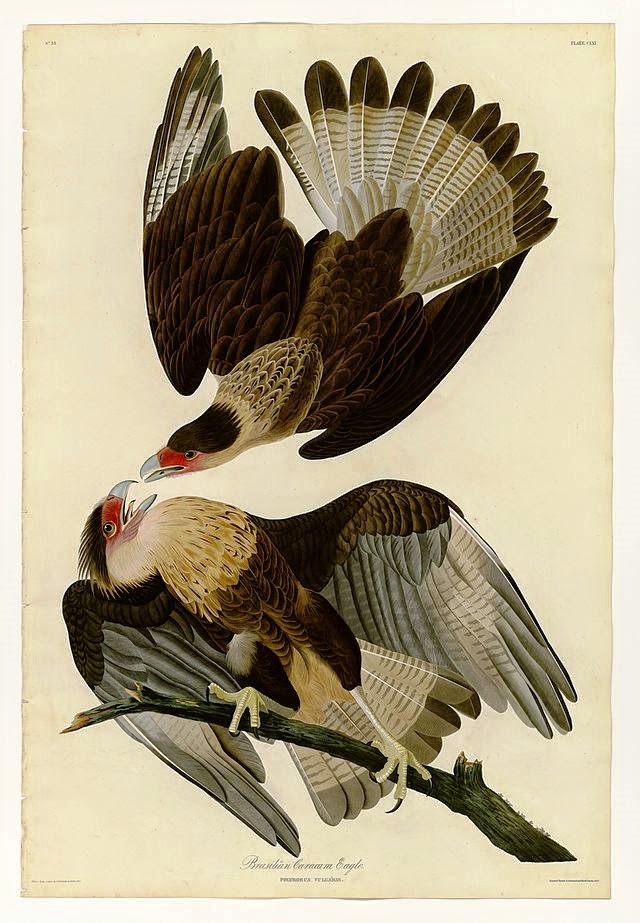 Two paper stocks were used throughout the production, both bearing the name of the English paper-maker James Whatman. William Balston, the apprentice and successor of the younger James Whatman, shared the rights to the old Whatman company and used the watermark "J Whatman"; the Hollingsworth family had the rights to the watermark "J Whatman Turkey Mill." The sheet size of the paper is known as "double elephant," measuring 39 x 29 inches, approximately the same size of the drawing paper that bears the same name. 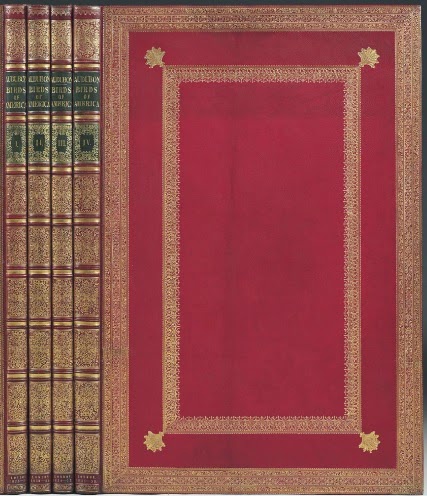 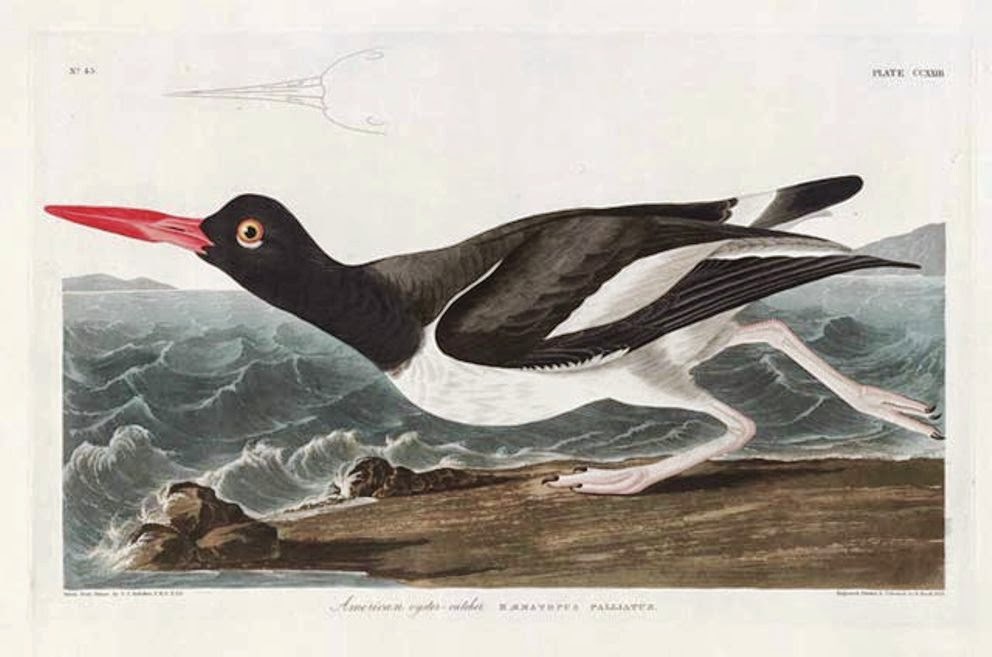 John Mackenzie (1788-ca 1850) is believed to have apprenticed in Frederich Leberecht Staggemeier's shop in the second decade of the nineteenth century. Mackenzie's independent business flourished in the second quarter of the century, during which time he held the office of bookbinder to both King George IV and King William IV. He is noted for his use of hard-grain morocco, most prominently on the natural history and color-plate books found in the Broxbourne and Grenville libraries. 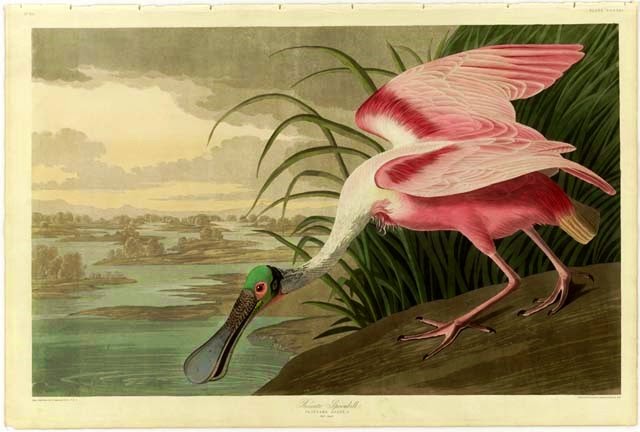 John James Audubon was born on April 26, 1785 in Les Cayes, Santo Domingo (now Haiti). He was the illegitimate son of Jean Audubon, a French sea captain and agent for a Nantes mercantile firm in Santo Domingo, and Mlle. Jeanne Rabin(e?), his Creole mistress. The mother died within a year of her son's birth, and young Audubon and his half sister (Jean's illegitimate daughter by another mistress) were sent to Nantes in 1791, where they joined their father and his wife Anne Moynet. The two were legally adopted in 1794, and Jean-Jacques Fougre Audubon (his full legal adopted name) spent his early youth at Nantes and Couron, where he received a minimal elementary education. Here, Audubon's lifelong preoccupation with birds found its earliest expression, as he spent endless hours collecting specimens from his countryside rambles, later to be stuffed and drawn. 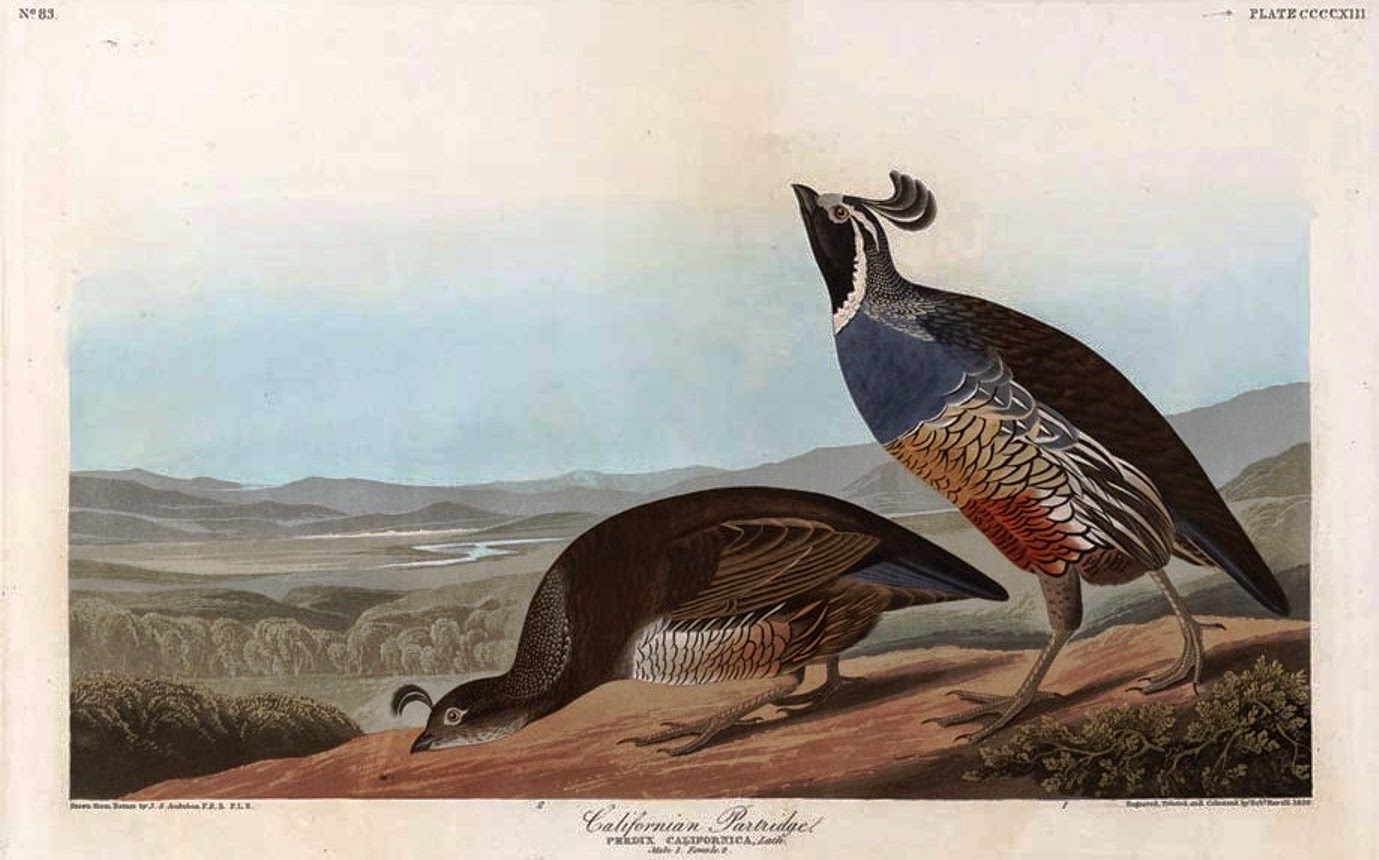 In 1803, following the loss of the family's fortune, when French political control of Santo Domingo had ended, John James was sent to eastern Pennsylvania, initially under the care of an associate of his father's, Miers Fisher. Difficulties in this arrangement led to Audubon's move to Mill Grove, his father's farm near Philadelphia, where his boyhood interest in drawing bird specimens grew. Here he met his future wife Lucy Bakewell, the daughter of a prosperous neighbor. They married in 1808 and moved first to the new settlement of Louisville, and later to Henderson, Kentucky, where John James failed as merchant and miller. In 1812, Audubon became a naturalized American citizen. 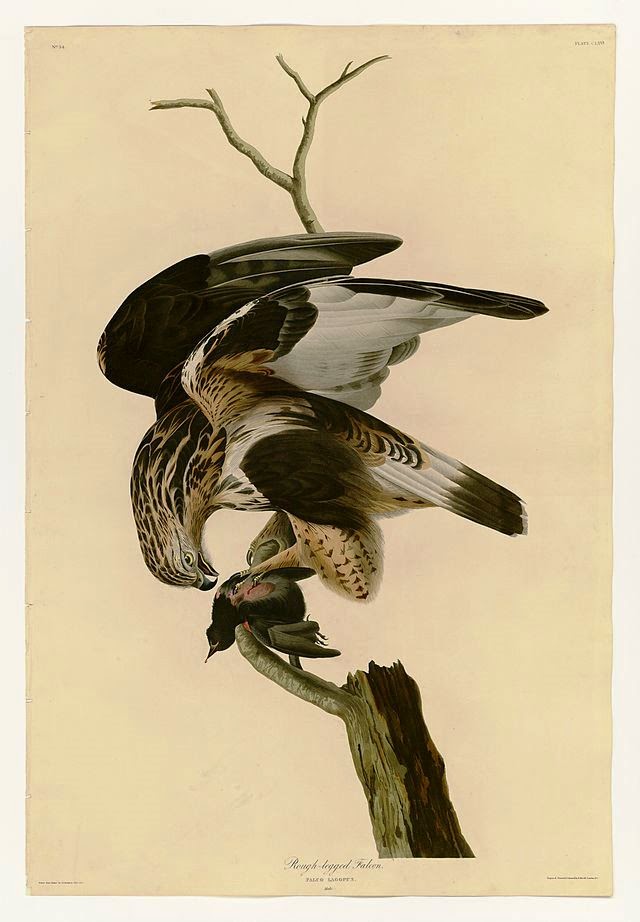 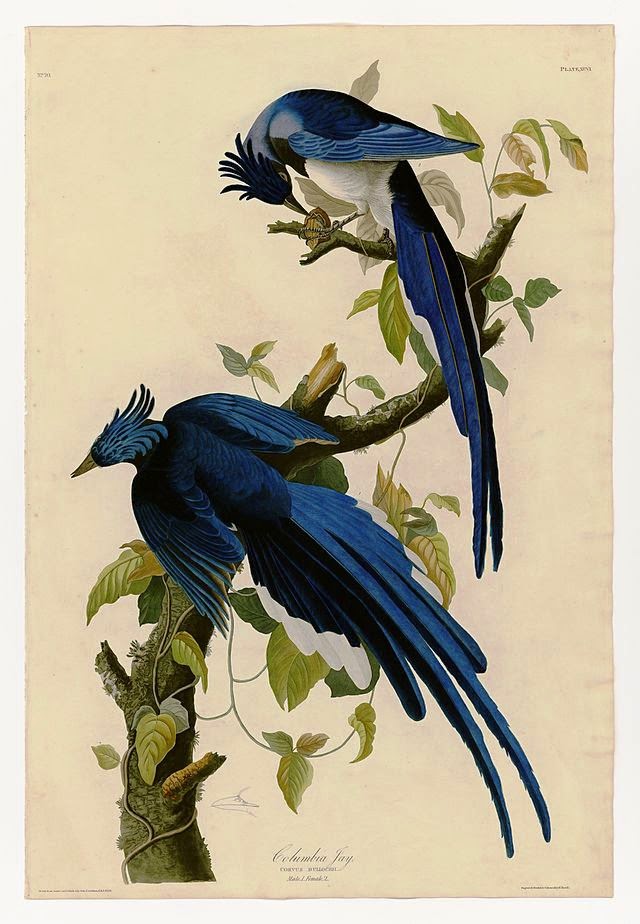 The largely unspoiled wilderness of Kentucky allowed Audubon an increasing range of birds to hunt and draw, and lacking formal artistic training, he worked hard at developing a new method of mounting dead birds on wires as an aid to delineation. In 1810, Audubon briefly met the distinguished ornithologist Alexander Wilson at Louisville, where he saw the first two volumes of the artist-author's pioneering American Ornithology. He later implied, perhaps correctly, that his own drawings were, even at that time, better than Wilson's. Although the idea of publication first entered his mind on this occasion, it was not until 1820, following bankruptcy, that Audubon set out by flatboat for Louisiana, with the single goal of adding to his portfolio of bird pictures. He worked precariously as an itinerant artist and tutor, leaving much of the burden to Lucy of supporting herself and their two sons. They settled on a plantation near New Orleans called Bayou Sara. Finally, Audubon came into his full powers as a brilliant painter of birds and master of design, chiefly working in Louisiana and Mississippi. 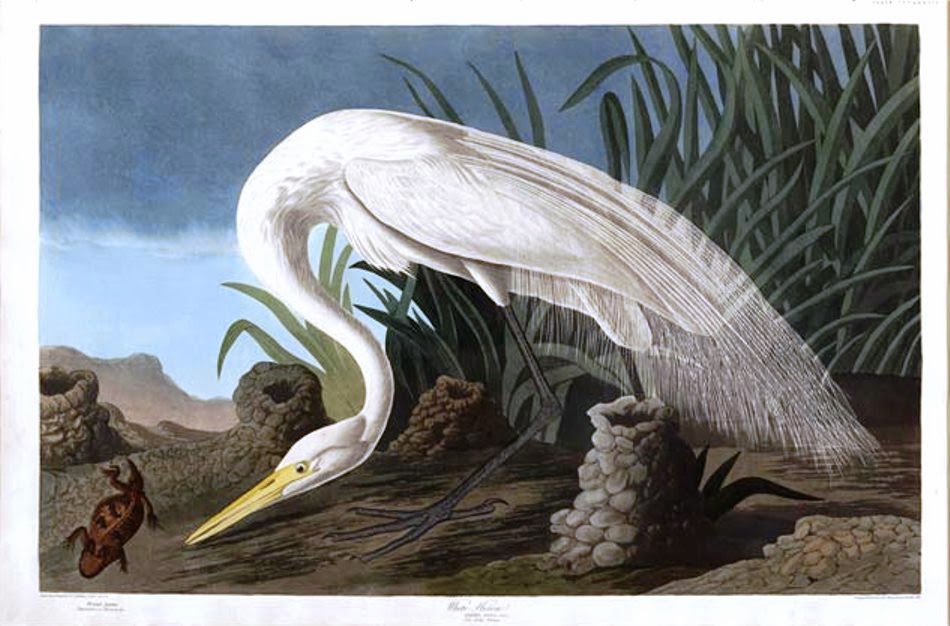 In the spring of 1824, he sought publication of his work in Philadelphia and New York. Failing this, he travelled to England in 1826. Originally, The Birds of America was planned to be issued serially in eighty parts of five plates each, for a total of 400 plates. The final count, however, would increase to 435 in 87 parts, owing to discoveries of new species made by Thomas Nuttall and John Kirk Townsend on the Wyeth expedition to the Columbia River in 1834. The monumental format of this work was dictated by Audubon's insistence that each species be shown life-size and his determination to depict all the known species found in North America. It soon became evident to Audubon that to publish the work he had envisioned, he must travel to Britain, where through exhibitions of his drawings he came in contact with the scientific community. One of his early acquaintances here was the historian and botanist, William Roscoe, who helped arrange these exhibitions. At one such exhibition in Manchester, he met the American consul, F.S. Brookes from Boston, who advised him to publish his "Great Work" by subscription, a traditional method of raising funds in advance of the great expenses involved in such a publication--which Audubon anticipated would take 14 years to complete. 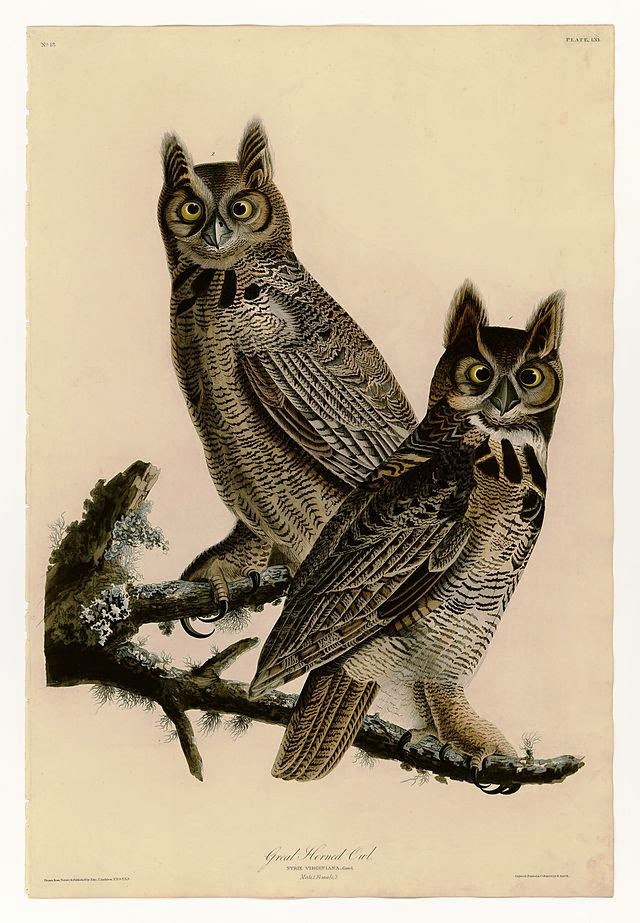 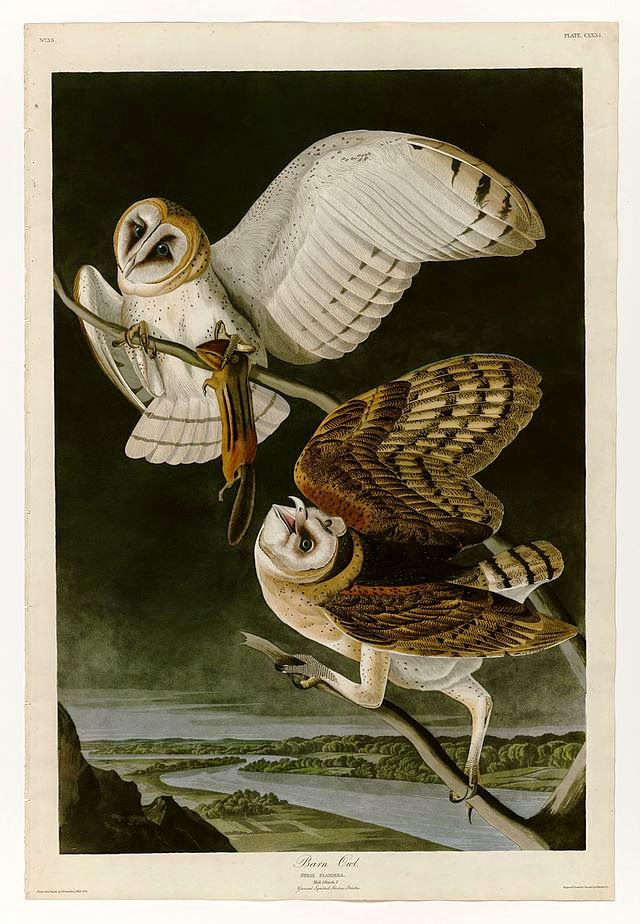 "The dramatic impact of his ambitious, complex pictures and a romantic image as 'the American woodsman' secured Audubon entry into a scientific community much preoccupied with little-known lands. He met the leaders of society and science and was elected to the leading organizations, including the Royal Society of London. Among his friends were the gifted ornithologist William Swainson, from whom he learned some niceties of technical ornithology, and the orderly, brilliant Scottish naturalist-anatomist William MacGillivray. The text for Audubon's pictures, separately produced at Edinburgh, emerged as the five-volume Ornithological Biography [a set of the text volumes is included with the lot]. MacGillivray edited this for grammatical form, and he also contributed extensive anatomical descriptions to the later volumes" (DSB). 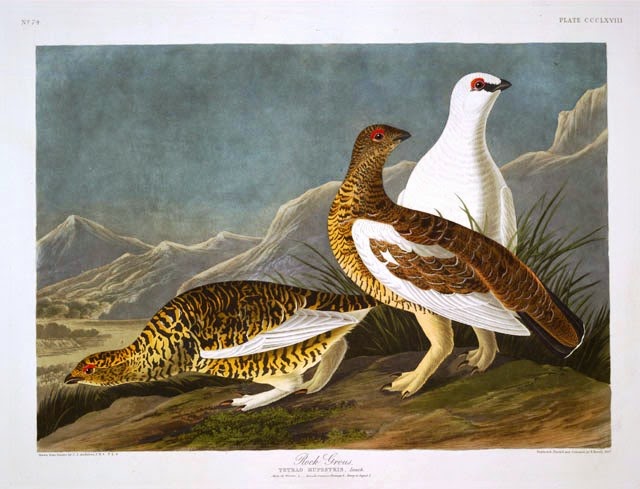 In Edinburgh, the printer and zoologist, Patrick Neill, a fellow member of the Wernerian Society, directed Audubon to William Home Lizars (1788-1859), "the best engraver in the city" who was currently engraving for Prideaux John Selby (1788-1867) and Sir William Jardine (1800-1874), Britain's foremost ornithologists. Lizars was so impressed with Audubon's drawings, that he put aside the work he was currently doing for Selby and agreed to take on the Herculean task of printing the plates. For the time being, Audubon had found his engraver, and could now concentrate on seeking patronage for the work, which took him to the noblest homes of Britain and Europe, and to the new markets of the young American Republic--as may be seen from the original list of subscribers. 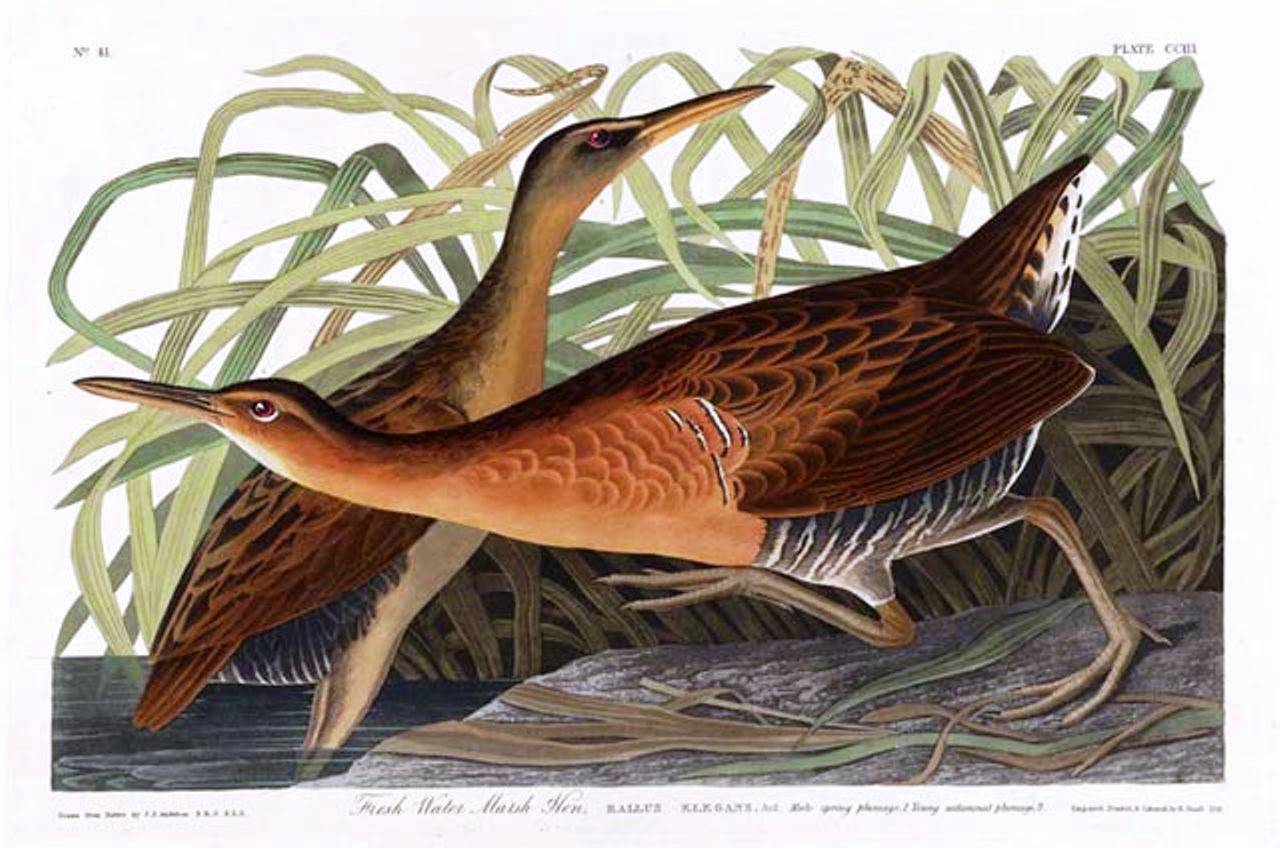 The relationship with the engraver Lizars was not long-lasting. During the engraving of the first two parts (each containing five plates), Lizar's colorists went on strike, causing Audubon to search for another engraver for his "Great Work." Audubon went to London, where he met Robert Havell, senior member of the well-known family of artists and aquatinters. At fifty-eight Havell, Sr felt he was too old for such an undertaking leading him to find a younger engraver for the project, which ultimately led to his own estranged son Robert Jr, an accomplished engraver working at the time for Colnaghi. The two were reconciled and entered upon a successful business partnership, known as Robert Havell and Son. A life-long friendship was established between Audubon and Robert junior, and together they created the greatest of all bird books, arguably the highest achievement of ornithological art. 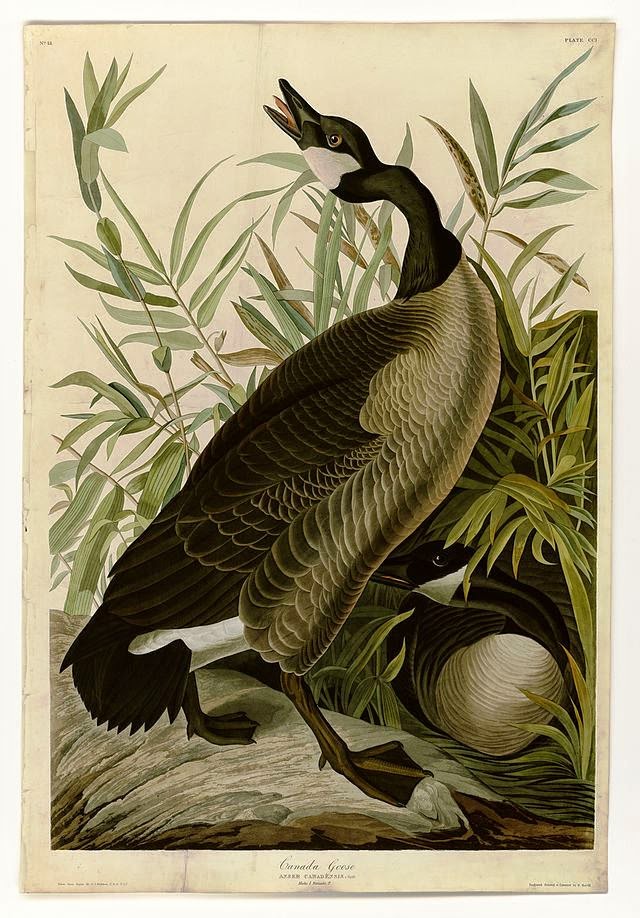 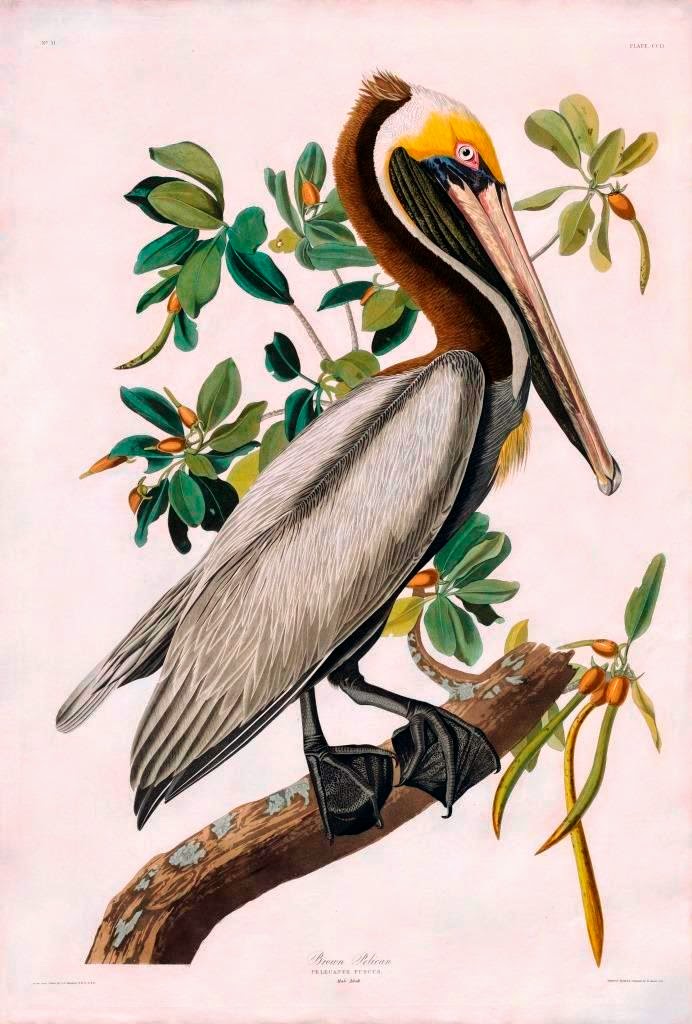 As a subscription publication, The Birds of America was issued over a decade according to demand, and the plates bear a range of imprints, which varies from set to set. We know that Robert senior died in 1832 and that Robert junior then styled himself R. Havell. Fries cites the variants in the names on the first ten plates, which are likely to cause the most confusion as they were the ones engraved by Lizars. They were handed over to the Havells as soon as they had been engaged for the project, and the imprint was amended to reflect this. The earliest states of plate I have "Engraved by W.H. Lizars Edinr.", while later states have "Retouched by R. Havell Junr." Although Havell junior engraved all the plates after number 10, there is no evidence to support a conclusion from the final variants of plates III, IV, V and X, that Havell completely re-engraved the plates, despite the removal of Lizars name from the imprint. Some plates bear no distinction between the senior and junior Havells. Others mention Lizars engraving, but Havell senior printing and coloring (e.g. plate VII), or Robert junior retouching and Robert senior printing and coloring (see Appendix B for imprints on the plates in the present set). 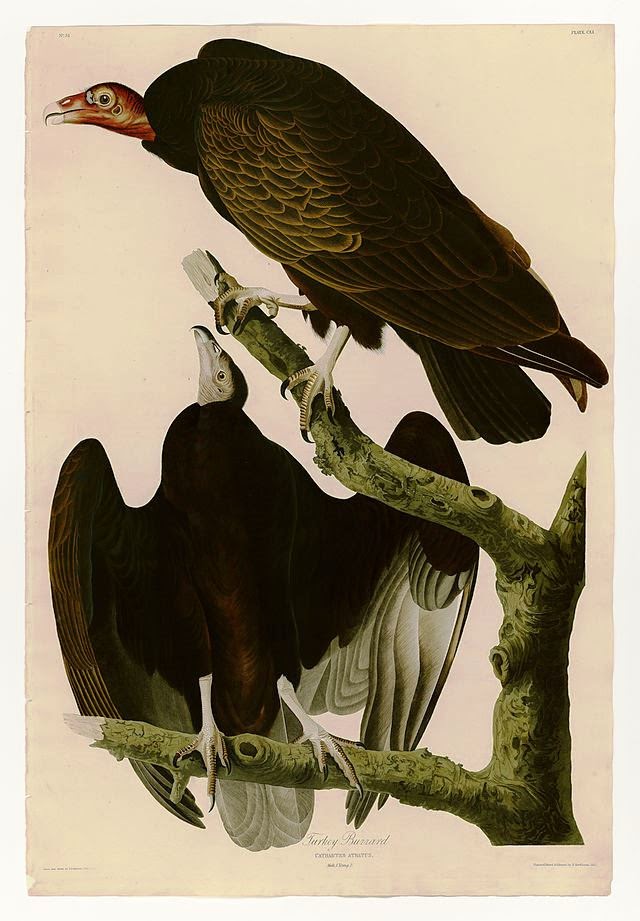 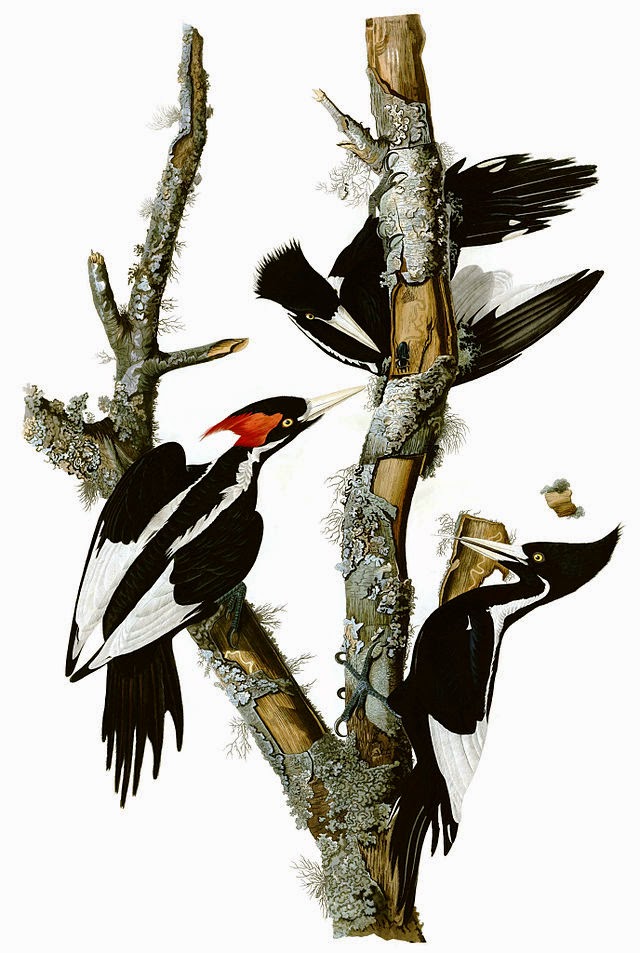 Although the final list of subscribers to The Birds of America totaled 161, a somewhat greater number of sets certainly was produced. Bibliographers of the double-elephant folio have calculated the edition size at approximately 200 completed copies. In her updating of Fries' 1973 census, Susanne Low writes, "119 complete copies are known to exist in the world today. 108 are in institutions such as universities, libraries, museums, athenaeums, societies, and the like. 11 are in private hands." 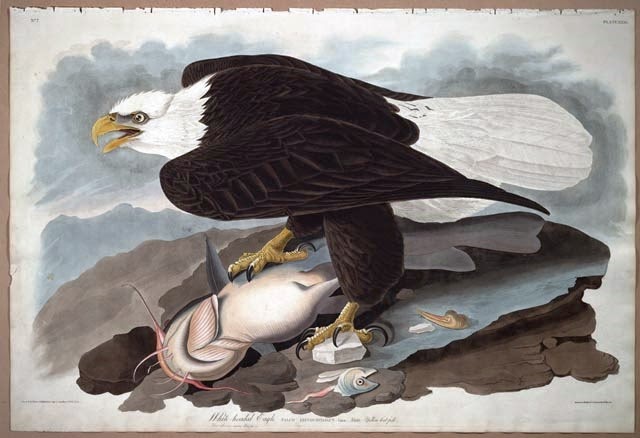 Since 1973, 24 copies of the book have been sold at auction. Of these, 14 have been sold on a sheet-by-sheet basis, many of these lacking plates, and are dispersed (including the Earl of Carnarvon copy comprising 159 plates only), and another incomplete set which lacked volume IV was sold together but presumably is now dispersed (the Buffalo Society of Natural Sciences copy). At the present time, 107 copies remain in institutions and 13 are in private hands (which includes the Fox-Bute copy, previously unaccounted for by Fries and Low). 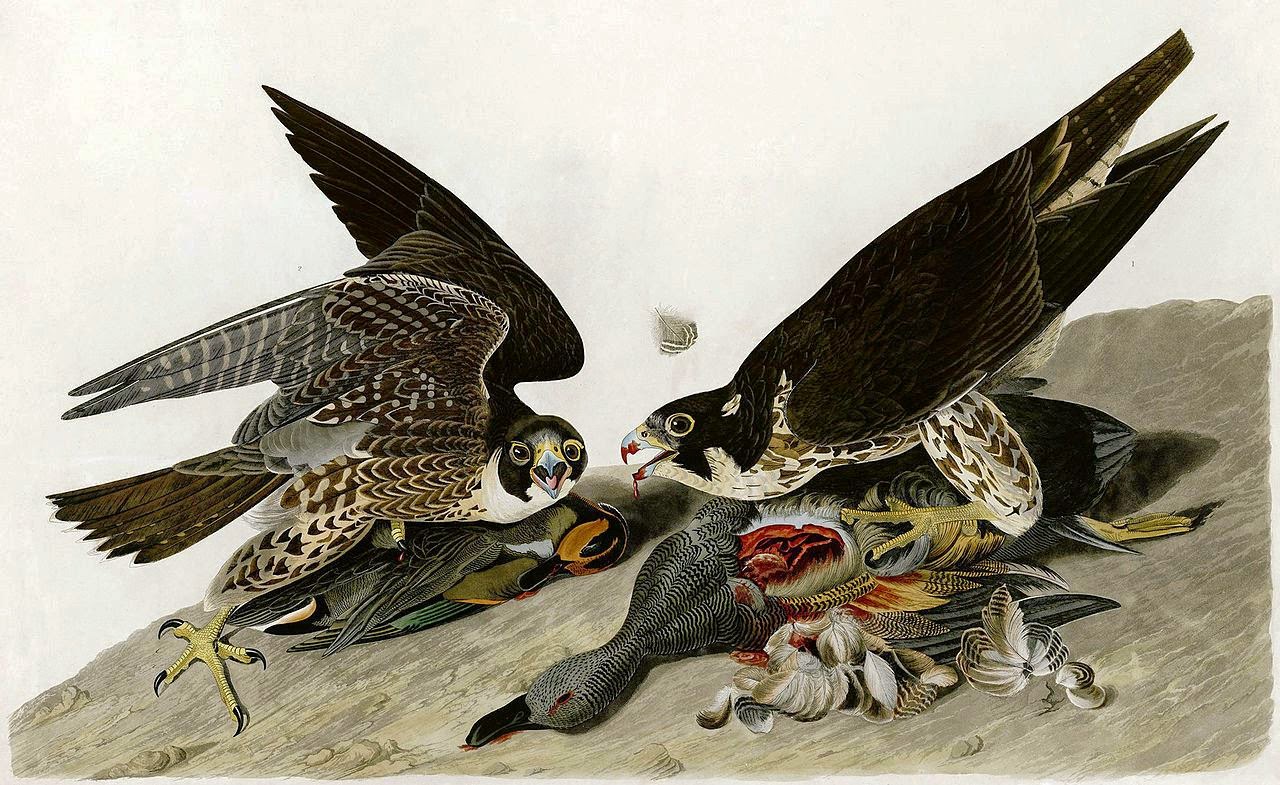 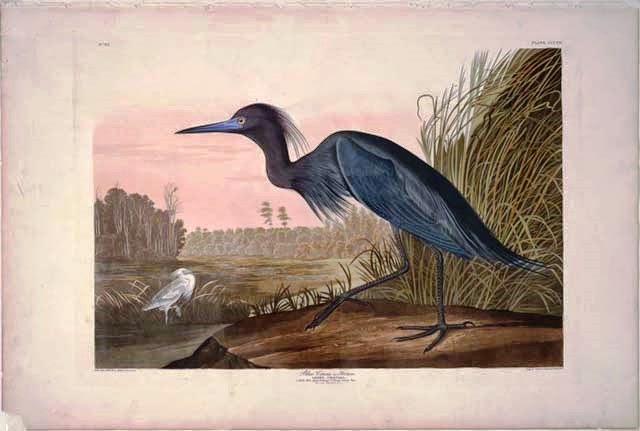 FIRST EDITION. "As early as November of 1826, shortly after Lizars had begun the engraving of the Birds of America, Audubon had written in his journal: 'I shall publish the letterpress in a separate book, at the same time with the illustrations, and shall accompany the descriptions of the birds with many anecdotes and accounts of localities connected with the birds themselves, and with my travels in search of them.' Had Audubon included the letterpress with the engravings, he would have been required, under the British Copyright Act of 1709, to deposit a copy of the work in nine libraries in the United Kingdom. Hence his letterpress appeared separately in the five volumes of the Ornithological Biography" (Fries, p. 47). 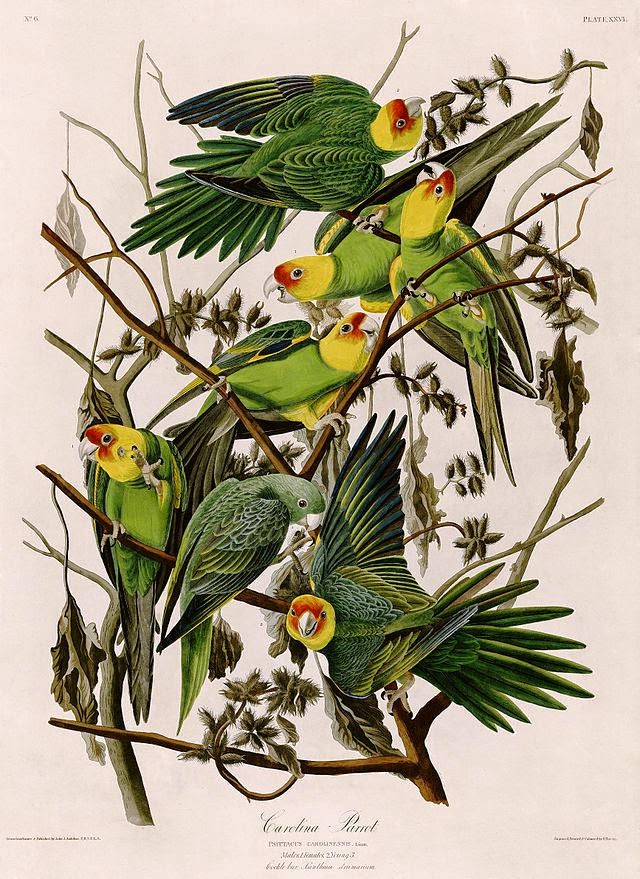 The Congressional Evolution of the United States of America

Presidents of the United States of America


Capitals of the United Colonies and States of America

Book a primary source exhibit and a professional speaker for your next event by contacting Historic.us today. Our Clients include many Fortune 500 companies, associations, non-profits, colleges, universities, national conventions, pr and advertising agencies. As the leading exhibitor of primary sources, many of our clients have benefited from our historic displays that are designed to entertain and educate your target audience. Contact us to learn how you can join our "roster" of satisfied clientele today!

*** President of the Confederate States of America

No Taxation Without Representation

US Bill of Rights